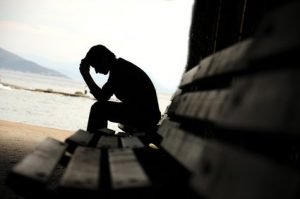 I recently came across this story, of a man who committed suicide. According to the story, he had just finalized his divorce, and he had left a recording stating that this was something that he had given some thought to for some years. His body was found by police next to the recording.

The truth is, depression is largely caused by our thoughts and when we are depressed, our thoughts are distorted. Research shows us that people who are depressed engage in a number of cognitive distortions including filtering, where the person focusses on negative events only and ignores or disregards the positive. They can catastrophize, and continually expect disaster to strike, small problems become insurmountable in the mind of a depressed person.

Take control of your thoughts and feelings

You control your feelings through the content and context of your thoughts. When I have worked with clients who were suicidal, the first thing I say to them is this;

“given that you have already considered taking your life, what do you have to lose in considering other alternatives for happiness?”

For the man who took his life, after years of “thinking it through” I would argue that he wasn’t thorough in his thinking process, as he clearly engaged in several thinking errors by coming up with several justifications to end his life when things did not go the way he wanted. In fact, he most likely had several more options for pursuing happiness, but due to familiarity, he had become anchored to a lifestyle, which he had long decided was the only way he could be happy.

Avoid the trap of depression

This is primarily how people fall for the trap of depression, they trap themselves into an all or nothing corner with beliefs about how the circumstances of their lives should play out. People do this often, and they do not realize it until their circumstances change to something they dislike. Another thing that keeps us trapped in rigid thinking, is being surrounded by people who think the same way we do and subsequently reinforce our thought process. It becomes more troubling, when our circumstances change for the worse, that we find ourselves surrounded by others who are unable to give us sound advice on how to cope and make peace with things not going our way.

Be it issues with wealth, health or relationships, there are always healthy alternatives to every lifestyle. It calls for an open mind, and courage to explore and act on other ways of thinking. Suicide is often a final solution to a temporary problem.

Ugo is a psychotherapist with Road 2 Resolutions PLLC

If you would like to work with Ugo, you are welcome to call and book your first appointment, or fill out the contact form and click Send. For those living outside Tucson, AZ, Ugo Offers Online Counseling.