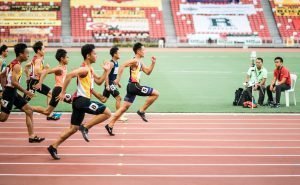 Yesterday evening, my wife gave our two children a competition. She informed them that whoever cleaned up the most in the dining room would get to watch one show of his or her choice before bedtime. This turned out to be a mistake, particularly for my son, because not only did he take to a sweeping frenzy, he also took it upon himself to make sure that his younger sister didn’t out clean him. Everywhere she attempted to sweep, he would block her path and claim it his territory to sweep. The competition had to be called off, with both children being made to work together to clean the room together and collectively pick a show that they could both enjoy.

As a father, I realized that I now had to educate my son about what competition really is and how to properly embrace the prospect of losing. Even in my practice, I encounter adults who don’t know how to deal with competition. The idea of failing or being left behind is so terrifying, that they either become severely stressed or they become depressed and check out from pursuing any meaningful goals.

Fear of competition can be broken down into two categories:

In my previous post, I discussed the importance of unconditional self-acceptance, specifically pertaining to the importance of seeing ourselves as worthwhile just because, as opposed to defining our worth based on our achievements or lack thereof. So what do people who are afraid of competition do when faced with any competition? They are usually presented with two options, the first would be to not compete, while the second (being the route my six-year-old) is to cheat.

Cheating is actually more dangerous for the cheater than those being cheated on or against. This is because sooner or later the truth would be discovered and the cheater will become exposed and held accountable. However even more damning, most people who have spent their life cheating are usually left disillusioned with being made to start from where they left off before they began cheating. This is because they have very little understanding of who they are and what they are truly capable of doing. They have been cheating for so long that they bought into the illusion created by their ego that they were actually good at what they did. The best thing that happened to my son yesterday evening was that his sister wasn’t having any of his bullyings and she let it be known throughout the household.

Competition is a good thing

Competition is a good thing because it gives us a realistic frame of reference to how well we are living up to our best in any facet of our lives. Ultimately we are in competition with ourselves, and our greatest adversary is our own ego because, at a fundamental level, our ego desires to exist in a world where everything goes our way and we have little to no struggles. The adult in us knows better. It knows that despite all our leanings we still know very little about the world around us, and so, therefore, there is always room for improvement.

In reality, competition is a win, win situation, provided you do your best. No matter the outcome of the competition you inevitable walk away with useful information about yourself that you otherwise would not have had.

If you are anxious about your abilities and are not sure how to overcome fears coaching and therapy can move you forward and guide you to bring out the best in yourself.

Therapy and coaching in Arizona

Ugo is a psychotherapist and owner of Road 2 Resolutions a counseling and life coaching practice in Tucson, Arizona. Ugo helps individuals and families in office and online. If you would like to learn more, you are welcome to call and book an appointment or fill out my contact form and click Send.